Is it Time for All-Female Aircraft Sections? 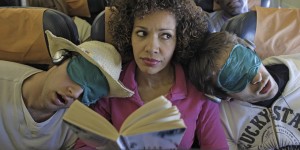 Living in the Middle East I’ve noticed that there are many spaces that allow women the opportunity to be in an all-female environment including public transportation, hair dressers and on certain days of the week, water parks. However, we don’t have the option for an all-female environment where we need it the most. Aeroplanes. Now, hear me out before you dismiss me as crazy.

Some airlines offer child-free sections in order to cater to passengers who don’t want to listen to babies who have excellent career prospects as sirens. Since children are usually not board members for airlines, it’s quite easy to make an objective decision about whether there should be child-free sections. However, since board members usually happen to be men, they are often oblivious to the fact that men are usually less pleasant to sit next to. Wait, it’s still not time to call me crazy.

I take about 15-20 flights a year, usually sitting next to strangers. When these strangers are men, they almost always spread their legs as far as they can, with one foot being about halfway into my legroom. And if I try to claim the footspace back, the same man’s elbow will protrude about 4-5 inches past the armrest. I can’t help but think that these men often intentionally get on the plane with terrible body odour so I move as far away from them as I can, giving them even more space to stretch out.

On my most recent flight, returning to Dubai from Copenhagen, I found myself wondering if it was the seat design that prevented my male seatmate from keeping his elbow, foot and foul odour to himself. So I decided to survey the plane. I noticed that when men were seated next to women they knew, or other men, they somehow managed to fit inside their seats. Needless to say, when women were seated next to women there didn’t seem to be any visible problems. So the logical conclusion was that the seats were not to blame.

What was interesting was that when men were seated next to unknown women, they usually did not fit in their seats and women were noticeably trying to move as far away as possible from the men conquering their personal space. In fact, there was even a man who had 4 seats to himself and was lying down, but still felt the need to recline all 4 seats and make things unpleasant for the girl behind him.

I’m not saying every male passenger is inconsiderate, but I think given a choice most female passengers would rather avoid having strange males within a millimetre of them. So airlines if you’re looking to get more female travellers on board, it’s time to give us our own space. And no, please don’t seat the crying babies with us. They are compact enough to sit next to the men.

← Losing the Battle Against Adulthood
The Soviet Travel Experience →

16 thoughts on “Is it Time for All-Female Aircraft Sections?”