Selfies: Fad or A New Kind of Normal? 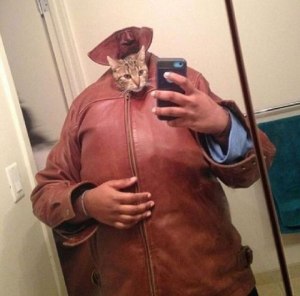 Selfies have become so popular even my mother knows what they are. And before you jump to any conclusions about her knowledge of pop culture I would like to point out that she has never heard of Paris Hilton, cannot recognise Fred Flintstone and refers to certain Michael Jackson songs as ‘biscuit tin music’. Just in case you are wondering, biscuit tin music is (jarring) music created by hitting a biscuit tin. Anyway, back to my point. Selfies seem to be quite mainstream, both the word and the action.

Now I understand the logic behind taking a selfie when there is nobody to take a picture for you. I come from a generation that has seen many self-timer pictures with missing heads. As happy as I am for today’s youth to not have to worry about appearing headless in pictures, I am still puzzled by them. I often see young people taking selfies even when they have friends around to take a picture for them. If the angle doesn’t turn out right they keep taking more selfies instead of asking a friend to help. Okay I won’t lie, this strange insistence to take a selfie instead of a regular picture is not just restricted to the younger generation. I’ve seen friends my own age do it too.

So, why exactly is the word ‘selfie’ starting to be used interchangeably with the word ‘picture’? I suppose it helps that 2015 is narcissist-friendly. You no longer have to pay for each picture you develop and pray that the film store didn’t ruin your prints. You can retake a picture as many times as you want to perfect your duck pout. Instagram and Flickr were created especially to share pictures. Facebook feeds the narcissism further by letting you know which people liked your picture. Perhaps selfies might have remained a fad had we not created the technology to bombard everyone with them.

That being said, selfie culture seems to have fads of its own. There are selfie sticks to help you capture trickier angles. Cellfy Stics which use suction cups to attach your phone to your mirror for ever popular bathroom selfies. And then there are belfie sticks for those even trickier shots of capturing your buttocks and face in the same frame.

5 thoughts on “Selfies: Fad or A New Kind of Normal?”