Despite being an avid traveller, it had been 14 years since I last visited Europe. Unless of course you count the hours I’d spent in Heathrow, Charles de Gaulle and Schiphol airports, impatiently tapping my foot in between balking at how expensive everything was in comparison to home. So when my 80-year-old grandmother who rarely goes beyond the front yard took a trip to Portugal some months ago, I knew it was time to rectify my limited European travel experience. 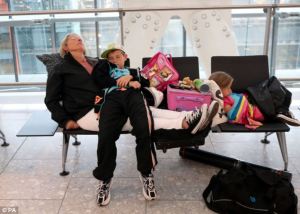 Booking a ticket to Vienna brought back memories of my first trip to Europe in 1993. I flew to Austria with my family, taking CSA (Czech Airlines). In 1993 the Czech Republic still had traces of the communist era as did their airline. As luck would have it, our flight had more passengers than seats. The crew decided the most practical way to solve the problem was to present our family of 2 adults and 2 children with 3 business class seats in exchange for our 4 economy seats.

Our family was anything but a democracy so my father accepted the offer without consulting the rest of us. He took the single seat for himself and soon forgot about the problems of his subjects. Sorry, I mean his family. The rest of us shared 2 seats. The trouble with 3 people sharing 2 seats is that there is one more person than seat belt.  Not that the cabin crew didn’t have a solution ready. They decided that for take off and landing I should sit in my mother’s lap with her arms clasped around me like a makeshift seat belt. For the rest of the flight we could ignore the seat belt sign. 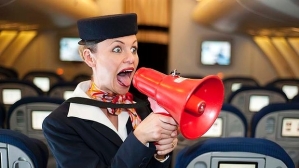 So for my travels in 2015 I decided to take Emirates, figuring that the lack of Eastern European background meant a high likelihood of a seat belt and an individual tray table for meals. My flight to Vienna was relatively uneventful unless you count the lady at the check in counter who told my friends she had given us seats together but did not. Still, I was quite satisfied with the entertainment system, food and leg room.

So when I arrived at Budapest airport for my return journey, also on Emirates, I assumed I would have a similar experience to my inbound flight. While I was willing to accept that it was just my bad luck that I was assigned a middle seat with less room than before, I became more doubtful when my food arrived because I received a tray of salt. Salty salmon salad, salty chicken for the main course, and salty cheese to eat with salted crackers. Still there was one unsalted item in my tray. No, not the dessert. That was salted caramel cake. I mean the small block of butter that was clearly labelled ‘unsalted’. Okay maybe Hungarians just like salt you might say.

Unlike the entertainment on my flight to Vienna, the flight from Budapest did not allow me to choose my own movies. I had to watch what they played. And watch was all I could do. The headphones alternated between crackling sounds with faint audio and silence. It didn’t matter if I tried different pairs of headphones, including my own. It also didn’t matter when I tried the seat next to mine. It led me to wonder that just maybe airlines are still capitalising on lower expectations of people from former communist countries. And perhaps the best way to confirm this is to go on vacation again…

2 thoughts on “The European Travel Diaries”