Umbrellas are Raining on my Commute 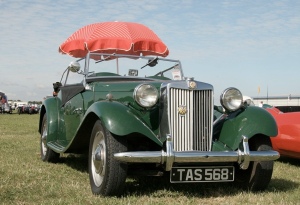 The one thing I like less than rain is umbrellas. And yes, I see the irony. Before I moved to sunny Dubai I usually relied on hooded sweatshirts and newspapers to avoid the rain. Now I am perhaps one of the only people in Dubai who is thrilled that we barely see any rainfall. However, while the amount of rain is scarce, I cannot say the same for umbrellas. In fact, the sunnier the sky, the more likelihood there is of seeing umbrellas. That’s because in Dubai umbrellas are more likely to be used to shield oneself from the sun rather than the rain.

Usually I don’t bother with other people’s accessories. However in the case of umbrellas I am bothered simply because they get in the way of my morning commute. Literally and figuratively. My morning commute includes a 1.5km walk from the metro station to my office, in an area that is densely populated with offices, connected by wide roads with speeding cars and narrow sidewalks. The large volume of offices served by one metro station means that there are hoards of people sharing these narrow sidewalks, rushing to get to work on time.

Back to the umbrellas that interfere with my sunny commute. What is worse than being trapped in a crowd? Being trapped in a crowd where a fair amount of people are holding sharp, pointy objects aka umbrellas. Waiting for traffic lights to change colours gives umbrellas holders the opportunity to stand right next to you and continuously poke your hair, shoulders and occasionally face. Trying to overtake an umbrella holder on an especially narrow path will result in the same amount of scratches you would get from an angry cat. I can’t help but wonder if it is time to get over my dislike of umbrellas and use one for protection during my commute, both outside and inside the metro.

15 thoughts on “Umbrellas are Raining on my Commute”