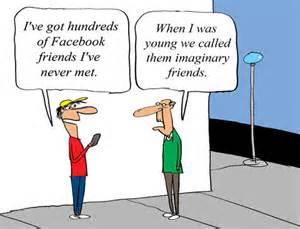 Some people add everybody they meet on Facebook. Some people are very selective about who they add. I generally accept requests from people I remember meeting. Yes even from the guy who sat behind me for a month of high school calculus, even though we only spoke twice.  The first time he tapped me on the shoulder and I turned around to see a grinning 17-year-old boy with a cockroach crawling along the palm of his hand.

2 weeks later he started another conversation with me.

“Hey can I borrow that book?”
“Sure when I’m done reading it”
“Cool. What’s the book called?”

2 weeks later I transferred to another class. No, not because of him but I won’t deny that was an added perk. Years later Facebook was invented and I received a friend request from him. Thinking he had outgrown his odd phase I accepted his request. While I look nothing like I did in high school, my Facebook picture made it easy for him to recognise me in public. So one day on the metro a random guy came up to me.

He finally revealed his identity. Not wanting to share details about myself I steered the conversation to his sister.

“What is your sister up to?”
“She’s married with 3 kids. The oldest is 7”
“Wow she started a family really quickly”
“She got married right after high school”
“Oh that’s so sad she didn’t go to university. I remember her being really smart”
“It really doesn’t matter because the kids are cute”

I was no longer repulsed by the cockroaches he held, but instead by his attitude to women’s education. Luckily for me I never saw him again. Unluckily for me I was still on his Facebook friend list. And thus after all these years I received a creepy Facebook message telling me I get more beautiful every year. Maybe it’s time to be more selective about who I add on Facebook. Clearly strangers on social media aren’t the only strange ones.