Bicycles Are Not Suitable for Everybody 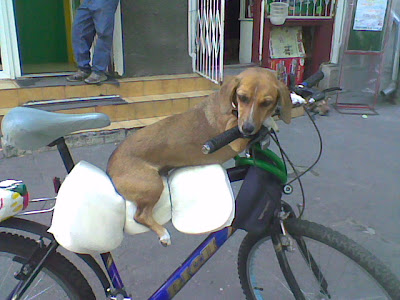 I love cycling. Yet I’ve never been able to own a bicycle for long. Unlike most kids, I didn’t get a new bicycle when I outgrew the old one. I got a new one when the old one was stolen. During the course of my childhood I dismissed my inability to hang on to a bicycle as my mother’s fault for not allowing me to bring the bike inside the apartment. There was nothing to lock the bicycle to outside the apartment, not that it mattered because she believed a lock was a waste of money. I figured things would be different when I was an adult.

It was the day I went on my first long bicycle ride that I initially suspected bicycles were not for me.  I was cycling with my roommate when we decided to stop at a Vietnamese restaurant for lunch. After a relatively tasteless and overpriced meal of deer, we went out to the fence where we had locked our bikes. As I turned the key, I was surprised to discover I was suddenly holding just half of it in my hand. The rest of the key was firmly wedged inside the bicycle lock. Desperate, I approached the restaurant staff and asked to borrow a knife to cut through the lock, but they insisted their restaurant did not possess any knifes. It’s only now as I type this that I realise why a restaurant in one of the least safe areas in Toronto would not want to hand a customer a knife after serving them a poorly cooked meal. So I had no choice but to leave my bicycle outside a restaurant which I was soon informed was a gang hangout.

As we made our way home, my roommate grew weary of cycling at the pace I was walking at, but was unwilling to leave me behind. No, not because it was unsafe neighbourhood, but because she did not know her way home. Thus she insisted I ride crossbar. Reluctantly, I balanced myself on her bicycle and proceeded to provide directions. I was about to find out her sense of direction was so bad it really did not matter if I gave her directions. I asked her to turn left and adjusted my weight accordingly. So, naturally my roommate turned right. Needless to say, I fell down and the bicycle fell on top of me. After a lot of pointing and laughing she tried to cajole me back onto the bicycle but I would have none of that. The bright sunny skies were conquered by rain clouds but I still chose to walk through the rain, because by this point I knew her bicycle was not for me.

I spent my walk calling everybody I knew trying to acquire tools to cut the lock off my bicycle but soon found out that none of my male friends fit the stereotype of being obsessed with tools. Eventually another roommate agreed to borrow his father’s saw at the end of the weekend. For once luck was on my side and the bicycle I had left outside a gang hangout for 2 days was still there. After a few minutes of struggling to cut open the lock, my friend Ray (you may remember him from here) pointed out that I had done such a poor job of locking my bicycle that he could just pull the lock over the fence.

So I became more careful about how I locked my bicycle. Sadly I was not smart enough to apply my new knowledge inside my house, because 3 weeks later, that’s exactly where my bicycle was stolen from. My roommate’s bike remained right next to where mine used to be. That’s when I knew for sure bicycles weren’t suitable for me.

18 thoughts on “Bicycles Are Not Suitable for Everybody”